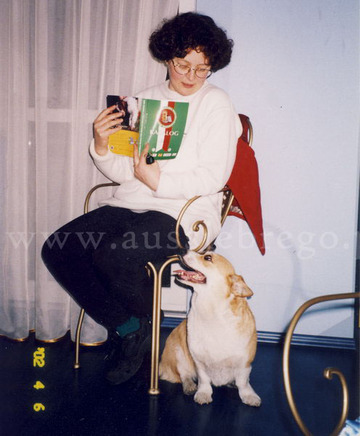 It is difficult to summarize in a few words almost 30 years of my life.
Of necessity, the description will be concise and brief - too brief and short to describe all of my friends and members of our family, because on such relationships based our co-existence ...

Since I reach for memories around me have always been dogs, but the first purebred dog with a pedigree and the first exhibitions began in the 70s from the black Great Dane IRAK Błękitna Radunia. Unfortunately because of his poor health - after two years he must have been asleep. After that appeared beautiful blue Great Dane AURA z Grodu Warcisława, Polish Champion, 4 x CACIB, Club Winner and many others exhibitions winner. She left her son BEJ Redivivus, also Champion, although not as beautiful as his mother. Great Danes are unfortunately short-lived - after him there was a yellow, very beautiful, very exposed Maranta (GARONNE GLENN Hyperion) and the era with the Great Danes ended in our house. They are wise, they have wonderful character, but they require constant attention when it comes to health and care, are very sensitive and delicate, and above all they pass too early and fast ....

In the meantime, scrolled a few other dogs: miniature Pincher, which left a few litters, and also with great fondness mentioned  Sweetie (SWEET SENSATION z Antuszy), the unforgettable American staffordshire terrier bitch with a great personality.

Small Welsh sheepdogs - pembroke welsh corgi – settled in our home for a bit longer, for ower 20 years. The first came to our home Melissa (SANTANA Białe Skarpetki), she gave a few litters of puppies, of which remained in the house pretty HESIA (HONEYMOON PEM. Redivivus).
The first female, which I set off into the world, the first Interchampion, vice- Europe Winner Tulln. Also her daughter Frusia who is with us to this day as a matronly 13-year old veteran, won the title of Interchampion, Middle – East Europa Winner, she  gave us much joy and satisfaction. As always, there must be some grain of bitterness - a beautiful Frusia has a nasty character and mainly due to we gave up the continuation of corgis’ breeding.
Redivivus kennel participated  several times in the competition for the best breeding and received:

When our house it became empty, we began to think about the company for Frusia. It should be medium size dog, hardy, and above all with good character, sociable, not aggressive, but guarding. The choice fell on an Australian Shepherd, which further distinguished by its extraordinary beauty. And so in the summer 2010 after long journey to Rzeszów to Altura kennel, INDIGO BLUE Altura - Brego became a member of our family.
Powered by